Whole Turmeric or Curcumin Extract – Which Is Better? 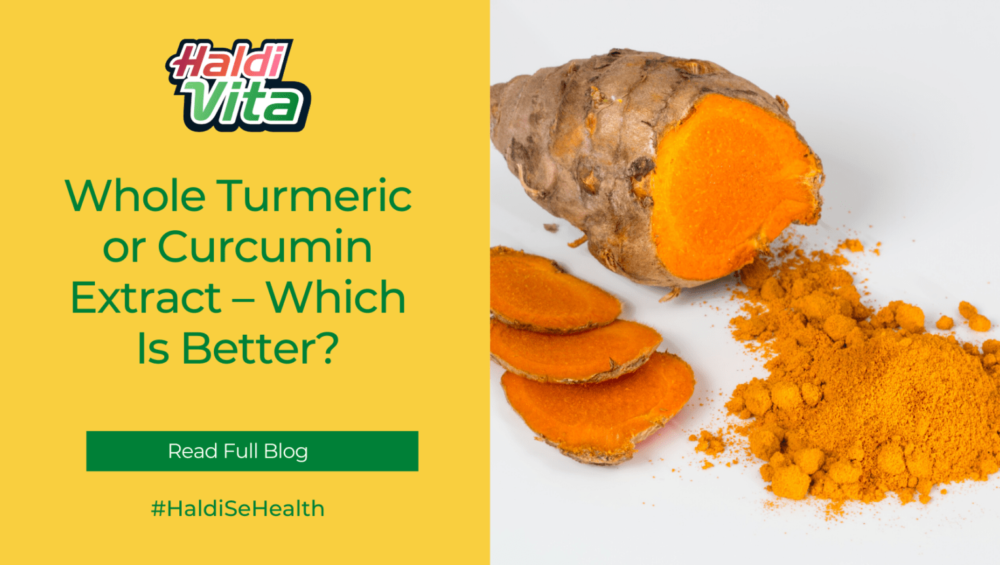 The discussion of whole turmeric or curcumin extract is a classic case of modernization and to an extent a marketing gimmick to lure customer’s toward buying an expensive product “extracted curcumin”.

Turmeric, a popular herb has been used in an Indian household and Ayurveda for centuries.

And then came the era of industrialization and flashy marketing- the focus turned entirely to curcumin.

Do we really need to consume only extracted curcumin or the traditional method of consuming turmeric with other ingredients is better?

Through this blog, we will try to explain both the cases.

What is the difference between whole turmeric and curcumin?

The terms curcumin and turmeric can be heard alternately. Especially when looking at the ingredients in your diet, there are some important differences between them that you have to bear in mind. When most people talk about “turmeric,” they mean the spice that is crushed from its root.

So lets under the basic difference first.

Turmeric a popular India ingredient is derived from a ginger – related plant and has beneficial antioxidant properties. It is a widely used ingredient used in Indian homes as well in traditional Ayurvedic medicine.

Curcumin is the bioactive compound present in Turmeric which is extracted by a scientific method known as chromatography. Now most studies have focused only on curcumin rather than Turmeric to demonstrate the beneficial effects of both.

Extensive research by modern science has shown that curcumin extract and turmeric have powerful health effects.

From what we have seen and heard, it is suggested that eating it as a condiment with your diet will produce a higher concentration of curcumin, well – digested, and healthy curcumin.

Now it is very important to understand curcumin, how curcumin or turmeric is absorbed in our body. This will help guide us in the right direction.

The debate of the turmeric or curcumin extract- which is better?

As we know that most of the studies have used curcumin rather than Turmeric to demonstrate the beneficial effects of both.

Curcumin extraction is a complicated process – curcumin actually makes up only 3 % of the weight of turmeric. This means you can get 100 % curcumin from turmeric as a supplement, in comparison a turmeric extract can contain up to 95 % curcumin and the root powder around 3 %.  So the overall extraction process actually reduces the potency of curcumin.

Now, when researchers compared the entire turmeric root to extra of curcumin, the whole root turned out to be more effective and at the same time cheaper.

Also, a closer look revealed that there are other compounds in the root of turmeric that contribute to the better absorption of curcumins into the body. Especially, black pepper is synergistic: It helps absorb many herbs, including Turmeric, and it adds curcumin to make it more bioavailable in your body, according to researchers at the University of California, Davis.

For best results, experts recommend choosing a brand of turmeric that has a high concentration of it and also contains piperine (HaldiVita- a dietary mix based on the same concept). Nutritionist Stacy Tucker notes that there are other ingredients in turmeric that can boost antioxidant and anti-inflammatory properties. Add black pepper if you’re just cooking with turmeric, and end your dinner with piperine!  Many of the experts we spoke with said curcumin itself is only as good as the amount it takes in.

Turmeric powders and supplements offer a whole – foods approach, retaining more of the root’s nutrients as nature intended while curcumin supplements provide an isolated form of the most active antioxidant compound found in turmeric. Based on the discussion we can conclude that when its comes to overall benefits, whole turmeric is better and more effective than curcumin extract.

HaldiVita dietary mix is based on the scientific principle of Ayurveda which focuses on using the whole of herbs and mix it with other ingredients to make it more bioavailable to the body. The approach offers a natural method of consuming bioactive compounds and improves internal health.